When you look into campaign analytics in Beamery, you will see full reports on how candidates are engaging with your Campaign messages.

When viewing these analytics in-app, the Campaign's deliverability statuses appear under the first column titled Status. When viewing your Campaign's analytics on a CSV export they will appear in the column under the title Events.

For example, let's say the following rule was set for touch two: "If "no open" to previous touch, send message 3 days later at 9:00 am"

The status for touch 2 in this campaign would be pending as the recipient has not yet opened touch 1 but it's not yet "3 days later."

Note: A pending message has not yet been sent and can be cancelled. 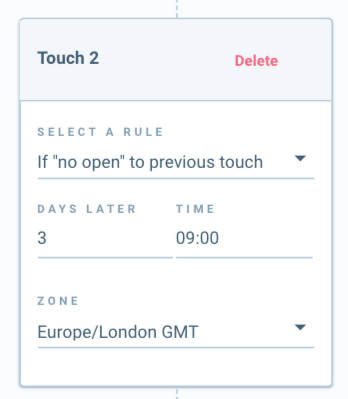 Building on the example we just used, it's now "3 days later" and the recipient has still not opened the first touch point. As such, the second touch is now scheduled and will go out at 9:00 am GMT.

Note: this message can still be cancelled up until the scheduled delivery time

Deferred: The recipient's email server has temporarily rejected the message

Delivered: A message has been successfully delivered to the receiving server.

Bounced: This message has not been delivered. A bounce may occur either as a hard bounce or a soft bounce.

Dropped: This message has not been delivered. A drop occurs when our systems identify that a message is sent to an email address that is already listed on one of the suppression lists: Bounces, Unsubscribes, Spam reports and Invalid Emails. If an email is already on one of the lists mentioned above, our systems automatically drop the email in order to protect your sender reputation.

Cancelled on [date]: Email has been manually cancelled by a member of your team.

As with the in-app deliverability statuses, you will see in the analytics export statuses for deferred, delivered and dropped. You may also find statuses for:

Processed: A processed event indicates the campaign message has been received from Beamery and is in our server preparing to be sent out.

Open: The recipient has opened the touch point message.

Click: The recipient has clicked on the URL in your specified touch point message.

Replied: The recipient has replied to that touch point.

Unsubscribed: The recipient has chosen to unsubscribe from subsequent marketing campaigns. This information will automatically be updated in Beamery and will prevent the recipient from receiving any future campaign messages.